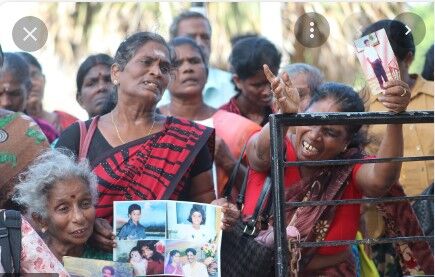 Sri Lanka is gradually coming under Western influence, with non-Western powers laying the groundwork for this. China is slow to help Lanka out of the debt trap. India has already done all it can, in terms of emergency assistance, and is waiting to see what the rest of the international community has up its sleeve on the issue of debt restructuring. This leaves Sri Lanka with no choice but to bet on the West and its institutions to help it out of the economic rut.

But the demands of the West have broad domestic political implications. Colombo must meet not only the demands of the IMF for drastic adjustments to the economic structure, but also the expectations of the United Nations Human Rights Council (UNHRC) and the human rights stipulations attached to the concessions. European Union trade under its GSP+ scheme.

The Human Rights Council’s September 6 resolution on Sri Lanka urges the government to “reinvigorate a comprehensive and victim-centered strategy on transitional justice and accountability, with a time-bound plan to implement implement outstanding commitments, including taking steps in relation to the establishment of a credible truth-seeking mechanism and a special ad hoc tribunal”. Victims should play a role in determining the form of the mechanisms, he added.

The resolution urged states to cooperate in accountability efforts, “including using available avenues of extraterritorial and universal jurisdiction, to investigate and prosecute crimes under international law committed in Sri Lanka.”

Sri Lanka rejected the resolution on the grounds that these stipulations violated the country’s Constitution. But he admitted the need to promote human rights and ethnic reconciliation in accordance with international standards, and left the door open for cooperation with the Office of the High Commissioner for Human Rights (OHCHR).

Sri Lanka could not completely flee the UNHRC because the latter is dominated by the Western powers on which Sri Lanka is highly dependent economically. Most of its trade is with the West.

This brings us to the EU’s GSP+ scheme. GSP+ gives Sri Lanka preferential access to the EU, the largest single market for the island’s $5 billion garment industry. Reuters reported in September 2021 that Sri Lanka had exported 45% (worth $2.7 billion) of its clothing to the EU in the first seven months of 2021. And 60% of clothing exports from the island to the EU had benefited from EU GSP+ concessions. , at 9.5% profitability.

But the concessions are linked to the ratification of 27 international protocols on labour, the environment and human rights. And that’s where Lanka failed. The EU has regularly complained about the indifferent application of these protocols. In June 2021, the European Parliament passed a resolution suggesting the EU consider withdrawing the GSP+ facility citing its “deep concern” about rights violations.

In October 2022, the sixth EU Working Group on Governance, Rule of Law and Human Rights visited Sri Lanka. She expressed concern over the persistence of the draconian Prevention of Terrorism Act (PTA) and continued detention of suspects without trial.

Sources close to the government said they were confident the EU would not withdraw GSP+ given the severe economic crisis on the island. But withdrawal is a theoretical possibility. And the stakes for Sri Lanka are high. The garment sector employs 350,000 Lankans directly and 700,000 indirectly, 80% of whom are rural women. These will be hit hard if the GSP+ is removed.

Recognizing this, President Ranil Wickremesinghe launched a new program of ethnic reconciliation. A Sunday newspaper reported that the president has appointed a ministerial team to work out the outline of the program which could be discussed with all stakeholders. The team, led by Prime Minister Dinesh Gunawardena, includes Foreign Minister Ali Sabry, Fisheries Minister Douglas Devananda and Justice and Constitutional Reforms Minister Wijeyadasa Rajapaksha. The team will meet every Monday so that they can complete their task earlier.

One of the mechanisms the government wants to put in place is a modified form of South Africa’s Truth and Reconciliation Commission (TRC), in which people can discharge themselves and accept or reject the charges. They could get death certificates and reparations. Wandering members of the security forces could get amnesty, but at least they would have admitted their guilt. It is a way of bringing “closure” according to a lawyer.

When Wickremesinghe was prime minister in 2018, he drafted a concept paper on a TRC for Sri Lanka (TRCSL). It was to be created by an Act of Parliament. Its mandate was to be to investigate and make recommendations on complaints “relating to damage and/or injury to persons as a result of loss of life, or damage and/or injury to person or property, ( (i) during, or reasonably connected with, or consequential to the armed conflict, or its consequences; or (ii) in connection with political unrest or civil unrest in Sri Lanka; or (iii) where such violations are of the nature prolonged and serious harm and/or harm suffered by individuals, groups or communities of people of Sri Lanka.”

The Act of Parliament was to incorporate statutory provisions providing for the appointment of an oversight committee to “enable all citizens of Sri Lanka, irrespective of race or religion, including the families of members of the police and forces security forces, civilians in villages attacked by terrorists, security force personnel and police personnel, as well as all affected persons in all parts of the country, to submit their grievances suffered during any phase of civil unrest , political unrest or armed conflicts that have occurred in the past.

“The proposed TRCSL should have sufficient administrative and investigative powers, including those granted to commissions of inquiry. This includes the power to compel the cooperation of persons, state institutions and public officials in connection of his work.

“While the TRCSL does not prosecute, it should be given sufficient investigative powers. But the TRCSL’s recommendations should not be taken as a determination of anyone’s civil or criminal liability,” the document states. .

Will anyone in the security forces admit to war crimes and rights violations, even when there is an amnesty provision? Will civilian victims of state violations accept amnesty as a just solution? Would nationalist sentiments expose the personnel of the forces? No wonder the 2018 proposal fell through.

The model, the South African TRC (TRCSA), itself did not fully achieve its objectives, studies have pointed out. On the positive side, the TRCSA held public hearings, received over 22,000 victim impact statements, and victims from the state as well as liberation movements freely expressed their feelings.

While senior members of the security forces did not cooperate, lower ranks did, with offenders seeking amnesty. Members of the liberation forces claimed that they had done nothing wrong as they were waging a just war, but they eventually testified too. Seven thousand requested amnesty and 1,500 obtained it. The public exposure went a long way in reducing the trauma of the victims.