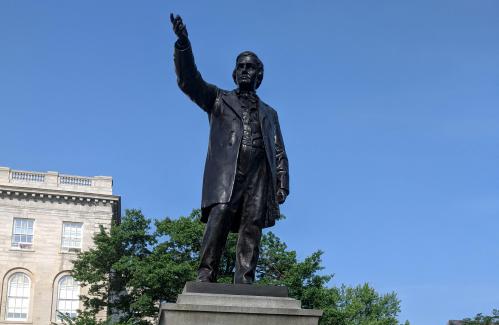 As a political science – economics student at UNH, I had to, together with the students in my political science class, write a white paper on globalization. There were strict requirements to get a passing grade. There were to be footnotes, a detailed bibliography, and sources used such as think tanks and peer review groups. If this academic rigor was not employed, a student would not achieve the passing grade. Nikole Hannah-Jones did not use any of these resources in his Project 1619 essays. She would have received an “F”.

If the faculties try to introduce Project 1619 into our schools without teaching Project 1776 alongside it, our teachers will inflict academic harm on our children and intellectual dishonesty on their part in this process. Senator Daniel P. Moynihan (D-NY) once said “we are entitled to our own opinions, but we are not entitled to our own facts”. Ms. Hannah-Jones is prohibited from revealing her facts about our children.

The first lie is that black Americans have “for the most part” fought racial injustice on their own. This lie completely ignores the abolitionist movement of the 1830s in New Hampshire and Massachusetts. These states were the birthplace of this movement with white men like John Adams, John Quincy Adams, and our own New Hampshire Senator John Hale in the foreground. Not a word from Mrs. Hannah-Jones on this movement. His claim that blacks have to go it alone is a lie, not a fact.

Parents, ask your children if during their school trip to our State House, did their teachers read them the inscription at the base of the John Hale statue? It reads: “The measure of my ambition will be full, if when my wife does, goes to my grave to drop the tear of affection in my memory.” They can read on my gravestone, whoever is under a forsaken load, place and power rather than bow down and worship slavery. Blacks were clearly not alone in their fight for racial justice.

Another lie is that Hannah-Jones is daringly brazen to use the tactic of using the race card and calling President Abraham Lincoln a racist. Lincoln was arguably the best president America has ever had. Lincoln used his superior leadership skills to sail the state ship through waters with cross currents to save the Union and end slavery. Lincoln did both.

Hannah-Jones used the example of a meeting Lincoln had at the White House with five free African-American leaders. He asked those leaders for advice whether it would be desirable to end slavery and send freed slaves to an African country for their own well-being. Prior to this meeting, Lincoln had already written the Declaration of Emancipation. So ending slavery was not a problem in his mind. History reports that there were mixed feelings on the issue of repatriation. (“Interview with historian James Oakes on the New York Times 1619 project”, World Socialist Website, 11/18/19).

New Hampshire’s own summer resident at The Fells in Newbury, John Hay, was Lincoln’s secretary and Hay was present at this meeting. Hay was so taken aback by this conversation that he called the idea a “false and barbaric prankster.” (“A Matter of Facts”, Sean Wilentz, Atlantic, 02/22/20) Lincoln was a good listener. He “got rid of” this idea and he never spoke about it again.

Here’s another example of how an older white man, a New Hampshire resident, made sure black people didn’t go it alone. Our teachers must teach the importance of men like Hay, Hale, Quincy Adams and John Adams in letting the world know that the white supremacist label has not performed well in New England.

The other argument Hannah-Jones used in his thesis that Abraham Lincoln was a racist were the words of a eulogy Lincoln gave to Senator Henry Clay in 1852. Lincoln described Clay’s thoughts that slaves were an “inconvenient presence” not himself. . According to Wilentz’s article, he asserted that Lincoln did not believe that the United States was “a democracy for whites only.” If Hannah-Jones is to call President Lincoln a racist because of this eulogy, she has to call President Biden a racist also because of Biden’s eulogy from Senator Robert Byrd, who was once a member of the Ku Klux Klan. .

In a speech in Peoria, Ill., In 1854, Lincoln said that “because of the abundance of the heart of man this extension of slavery is bad: and because of the abundance of his heart, his mouth will continue to speak ”. Can we really think that Lincoln, who gave this speech, drafted the Emancipation Proclamation, led the nation to ratify the 13th Amendment and ultimately gave his life to achieve the goals of his presidency of saving our union and d to abolish slavery, is a racist?

The program for Project 1619 is distributed with the help of the National Education Association, the largest teachers’ union in the country. The union announced that it recently worked with The New York Times distribute copies of Project 1619 to educators and activists across the country as part of NEA’s Edjustice program.

As Dr. Allen Guelzo, senior researcher at the Social Sciences and Humanities Council of the James Madison Program Policy Initiative at Princeton University, said, “Project 1619 is not history, it is. ignorance ”. (“Preaching a conspiracy theory”, City newspaper, 08/12/19).

Parents, Grandparents, and Taxpayers, unless you want the Project 1619 curriculum to teach our students that President Lincoln was a racist, you must ensure that Project 1619 is not taught in your schools. There are better, more factual ways of teaching the evils of slavery in American history than the biased and misleading information from Project 1619.

(Joseph Mendola is a former member of the Kearsarge Regional School Board. He lives in Warner.)