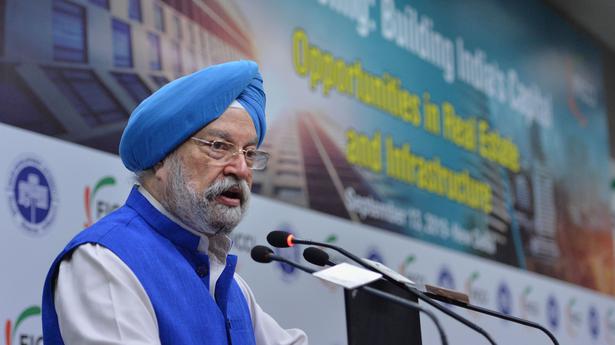 Land pooling: no progress on the proposed amendments to the SD law

Some tweaks to proposal will only benefit select group, says Delhi BJP chief

Some tweaks to proposal will only benefit select group, says Delhi BJP chief

Three months after the formal announcement of proposed amendments to the Delhi Development Act 1957, aimed at making land commoning compulsory in the capital, no progress has been made on this front.

A senior Delhi BJP leader familiar with the developments said The Hindu that the proposed changes are “unlikely” to pass soon and added that some changes have been made to the proposal that “will only benefit a select group”.

The proposed changes – which were announced by Union Minister Hardeep Puri on March 8 – aim to remove obstacles to the land pooling policy of the Delhi Development Authority, in which the urban body plays the role of facilitator.

The amendments, if passed, would make land pooling mandatory even for landowners who have not expressed an interest in the scheme if the minimum 70% stake is reached in an area. The amendments also propose to grant powers to the Center to declare the pooling of land compulsory even if the minimum participation rate is not met.


Notified twice, in 2013 and 2018, the land pooling policy aims to provide 17 lakh housing units – including five lakh units for economically weaker sections – for a population of around 80 lakh people.

Currently, 104 villages, which have been divided into six zones and subdivided into 129 sectors, have been identified for land pooling. The DDA had recently issued conditional notices for the formation of consortia in three high priority sectors falling within the N and P-II zones. However, development works have not yet started under the land pooling policy.

Asked about the status of the amendments, a senior DDA official said a proposal had been sent to the Union Department of Housing and Urban Affairs with “some adjustments” to some of the amendments.

Declining to elaborate on the adjustments, the senior official confirmed that the two amendments that propose to make pooling mandatory have been retained in the proposal.

“The changes have been discussed, corrected and sent to the ministry. Now it’s up to them to decide. The changes made to the amendments are intended to improve them,” the official said.

Despite multiple requests for comment, Manoj Joshi, secretary of the Ministry of Housing and Urban Affairs, did not respond.

While the land pooling policy has remained promising on paper, the DDA has struggled to execute it on the ground due to a condition that requires 70% contiguous land in addition to the minimum turnout. .

Although the urban body has reached the minimum participation rate in various sectors, it must still meet the minimum condition of contiguous land.

Since the DDA first opened its window for land pool applications in February 2019, a total area of ​​7,275.45 hectares out of a total of 6,922 applications has been registered.

The proposed changes seek to eliminate adjacency by making pooling mandatory. Issuing conditional notices now places the onus of securing adjacency — and a 90-day implementation plan — on landowners who have already expressed interest in the project. Failure to comply with this instruction will result in the cancellation or withdrawal of the notice.

US FERC: The Next Battleground to Define “Responsibly Sourced Natural Gas”