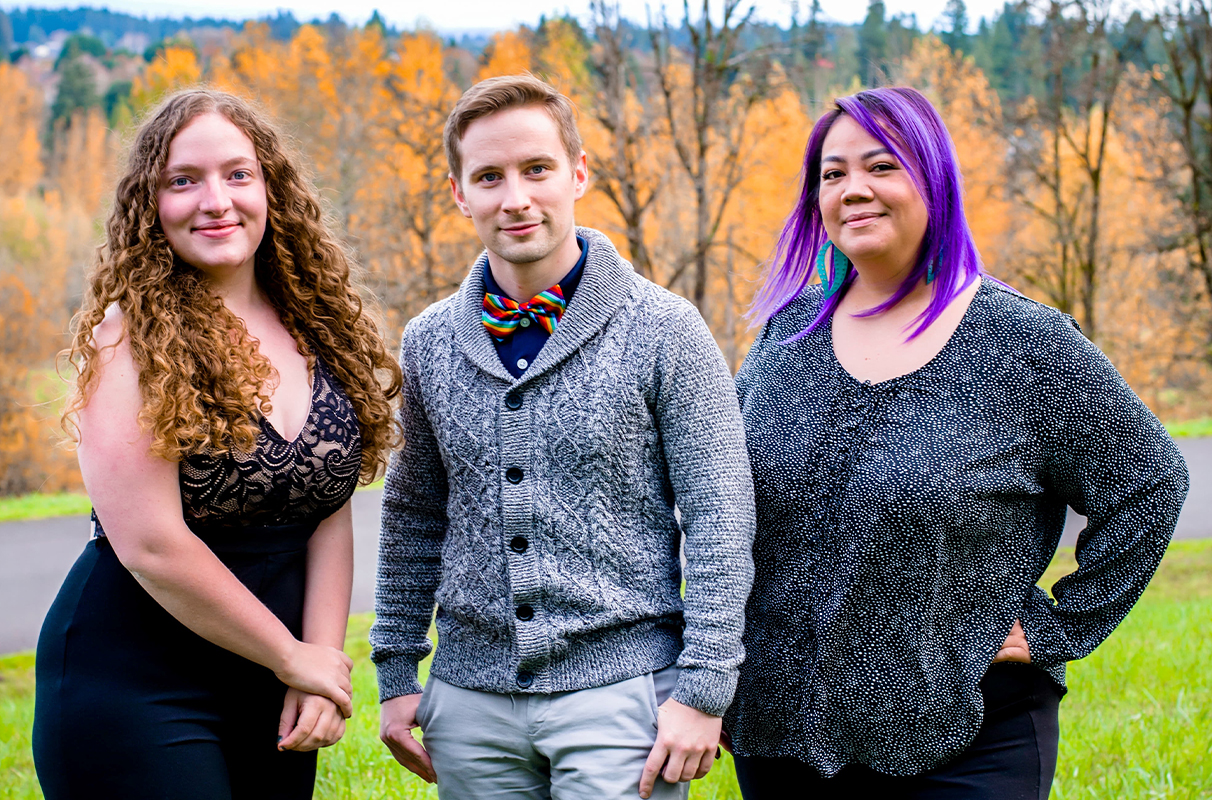 Three students from Washington State University in Vancouver decided to turn a College of Education classroom assessment into an impactful educational tool for students, teachers and parents.

Thomas Duncan, Annabelle Petty and Jamie Rollerson have developed a podcast on the topic of culturally and linguistically responsive (CLR) pedagogy as an alternative to a conventional classroom assessment or test.

The podcast examines the subject of CLR, a theoretical method of teaching in which the student’s home language and culture are validated and met with fair practice to ensure academic success.

The practice of CLR also invites students to be equal citizens in the classroom community through recognition of age, orientation, nationality, socioeconomic status, religion, gender and of ethnicity. In one of the first podcasts, the hosts discussed the subject of racial injustice, unconscious bias and white privilege and did so by warning the listener that certain conversations might make people feel uncomfortable or on the defensive.

Duncan, Petty, and Rollerson met during their freshman year at WSU Vancouver, each pursuing a Bachelor of Education.

Jessica Masterson, assistant professor of teacher preparation, extended an alternative testing opportunity to students in her pedagogical foundation course, during which the trio created their first podcast together. It was called “An Outline of Instruction”.

Rollerson said she researched podcasts and their features for two years before joining Masterson’s course and was eager to create a multi-person version. All three students said they found the conversation to be a beneficial learning tool, inspiring partnership.

Rollerson’s job is to edit the episodes after filming, a task she says can take 7-10 hours a week.

“The assignment was only worth five points and I could have written an article, but it was something I was passionate about and something I thought would be good for the world in case it went anywhere,” said- she declared. “It became a passion project and the one thing I looked forward to every week.”

A series of five episodes of “Insight into Instruction” has begun, far exceeding the intended scope of the assessment.

“I learned 10 times more than I typically learn from a class writing an article,” Duncan said.

Masterson introduced CLR to his students using Sharroky Hollie’s textbook, “Culturally and Language-Relevant Teaching and Learning.” Hollie’s book builds on the culturally appropriate teaching methods of Gloria Ladson-Billings with a focus on linguistics.

The team initially envisioned their podcast reaching classmates and professors, but quickly caught the attention of those eager to learn more about CLR and its application in the classroom.

So, rather than stopping at five episodes, satisfying the course evaluation requirements, the band decided to continue.

Petty said the podcast has been transformed into a larger tool for others.

After the group welcomed Hollie on its ninth episode, the author posted on social media, which boosted the podcast’s listener count to over 100.

“If I can make my voice heard and that kind of gives a teacher the ability to think a little differently about something they’re doing for their student, then I’ve indirectly helped that child get a better education” , Duncan said. “That’s really what I want to do: help teachers and students become the best versions of themselves by giving them the tools to do so.”

The students also used the podcast as an alternative means of assessment in their other courses.

Duncan said the support of Masterson and Shameem Rakha, an associate professor at the college, was a significant catalyst in the expansion of the podcast.

Several faculty members intend to entrust the podcast to other students so that they can gain an understanding of CLR in a peer-to-peer style.

“It really supports us in continuing what we do and what we’ve created,” Duncan said.

The trio will attend the Lilly Conference in Asheville, NC in August to share their experiences in multimodal formative assessment with a CLR foundation.

An overview of the instruction can be listened to here: https://anchor.fm/insight-into-instruction/episodes/Spring-2022–Teaching-Elementary-Mathematics-Self-Reflections-e1h5ssd