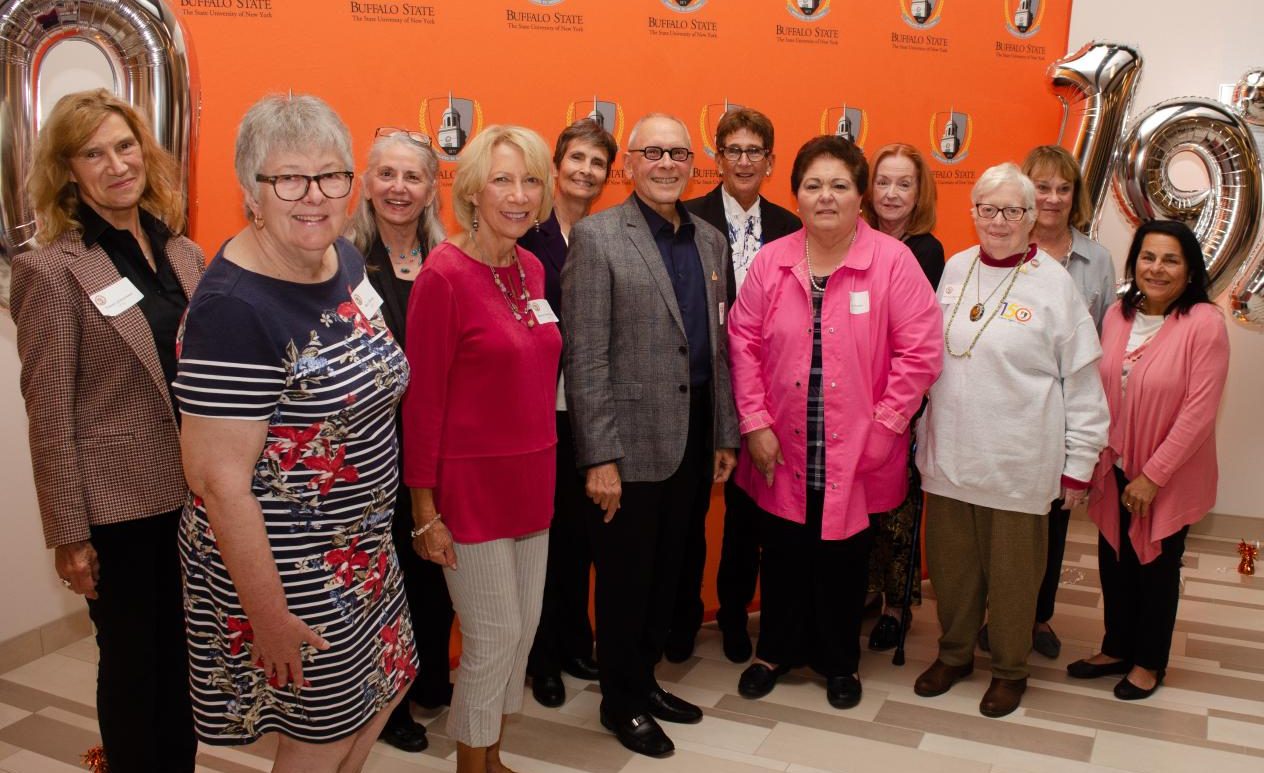 Among the many events last week to celebrate Buffalo State’s 150th birthday was the Buffalo State Class 50th Reunion of ’70 and ’71! After a tour of the campus, the alumni were treated to a cocktail and a banquet at the Alumni and Visitor Center.

Just by being in the room, you could tell that everyone was thrilled to be back at Buffalo State with their peers. During the reception mix, I sat down with some of the alumni in attendance and asked them about their time as a student at Buffalo State in the late 1960s and early 1970s. Although no ‘having only had a chance to speak to a handful of alumni, I heard a lot of interesting anecdotes about life in Buffalo State during the infamous “Groovy Era”.

Sue (right) and Tom (left) started dating during their freshman year at Buffalo State and are still together now as husband and wife. Sue specialized in speech and hearing and Tom in secondary science education. They often commuted together after Tom picked up his car and spent their entire school day on campus.

The most notable thing they mentioned was the construction of the Campbell Student Union building, namely the messy situation it brought about. Before construction began, the area where the union was going to be built was simply a large parcel of land. The only thing you could use to walk through the ‘mud party’ was a series of 4 × 8 wooden planks placed on the plot as a temporary walkway. I think we can consider ourselves lucky that we don’t have to face such construction issues!

Tom also remembered legendary basketball player Randy Smith and the honor of seeing him play while on the Buffalo State College basketball team.

Sue and Tom’s daughter also ended up dating Buffalo State, so it’s safe to say Bengal pride is part of the family!

Mary Dewey (right) majored in Outstanding Education and Minor in Humanities with English and Spanish. She was also a commuter and ended up forming a group of friends of all commuters. She told me of classic college memories of spending Thanksgiving with a friend’s family at their home on Long Island, sightseeing, and going to the ocean with the friends she had met here in Buffalo.

Mary fondly remembered her favorite class she took, and the one she often thinks of over the years, was art for non-majors. Although this was an art class for, well, non-art specialists, it was very structured and offered an incredible amount of information for novice artists, which Mary greatly appreciated. . She remembered the teacher as a young woman who obviously loved to teach. She couldn’t remember the teacher’s name very well, although she hoped she would read this and know how much her class meant to Mary.

Elaine Strompf (left) was also in education as a major in elementary education and returned to graduate with her masters in 1975. She lived on the Northwing and Towers campuses during her college career at Buffalo State. She and a few other alumni took a tour of the campus earlier today and was surprised to see how much the campus had grown with new buildings and areas, although she also expressed that the dorms seemed almost unchanged from when she lived in them. 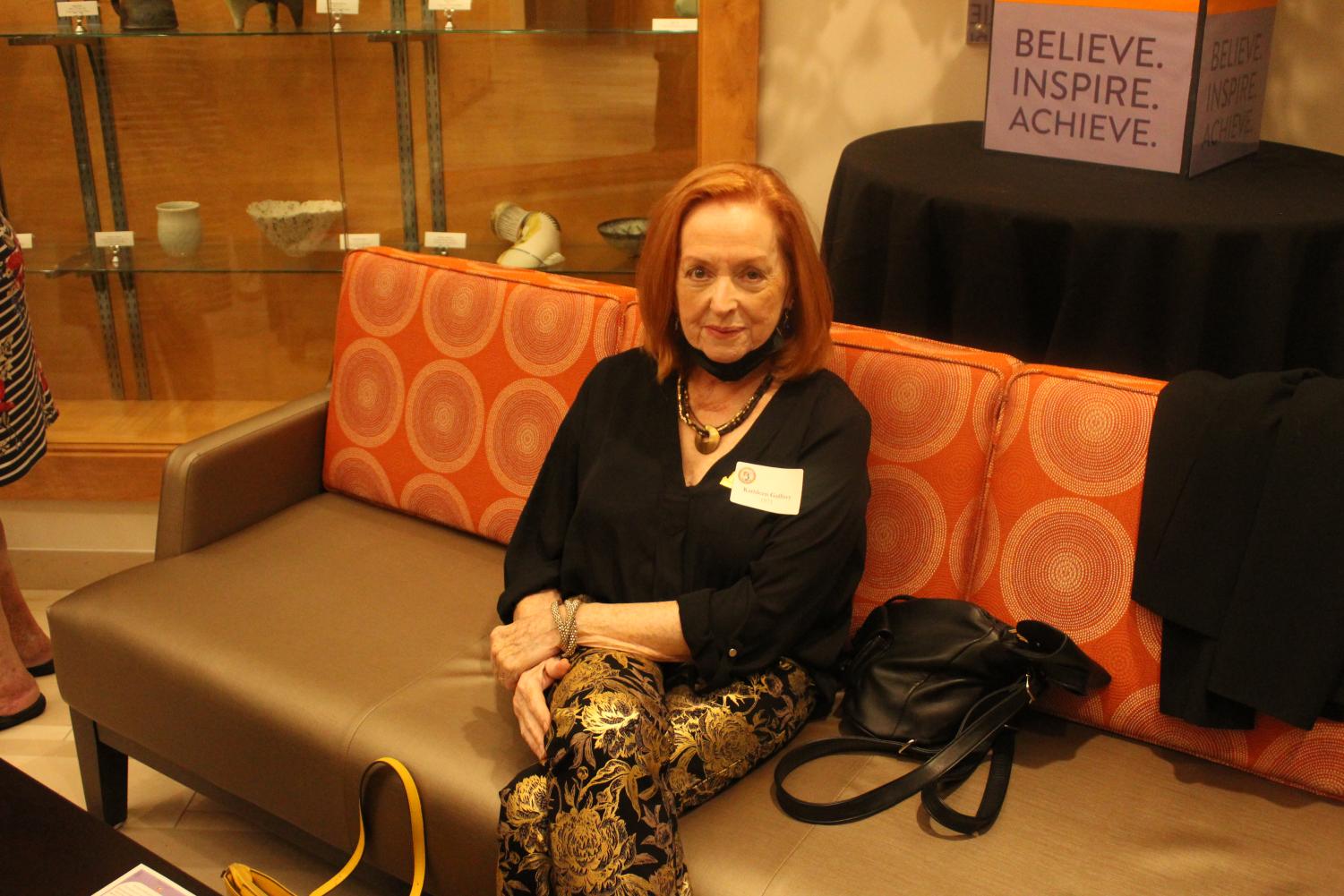 Kathleen Gaffney earned a theater degree which led her to have an acting career in New York City. Later in 2006, she was recruited by the Studio Arena Theater in Buffalo to come and take charge of their operations as artistic director. In 2011, she decided she wanted to get her Masters of Science, so she revisited Buffalo State and earned a Diploma in Creativity and Innovation in 2013. She also received the Buffalo State Distinguished Alumni Award in 2003.

Returning to her first visit to Buffalo State, she recalled that the teachers were so inspiring that she wasn’t sure exactly what she wanted to focus on or do for a career because everything seemed so interesting to her. This intrigue leads her to both theater and biology.

Regarding biology, Kathleen told a story about a time when she made an impression by outsmarting her teacher. In one lesson, the class was dissecting frogs, and their teacher, Collins, informed the class that the only way to remove the frog’s brain was to break it into several pieces. Instead, Kathleen decided to make a capillary incision on her head, exposing the brain, then, believe it or not, squeezed the eye sockets and the brain popped out “like a piece of toast”! It’s not much of a surprise that she later graduates with a degree in innovation.

She called her teacher and he asked her to show her how she did it three times. He even offered her a job in the lab to help graduate students with their projects. Even though Kathleen was already in the theater, which takes a lot of her time, and the work would run from midnight to 6 a.m. on weekdays, she agreed and worked in the lab for a whole semester.

Kathleen still works as Creative Director and is now CEO of Studio Arena Theater. She is also the president of Kasey’s Key, an organization dedicated to helping those grieving the loss of suicide.

Dianne Bodie-Doherty (right), pictured with her husband (left), also majored in elementary education, which she then applied when working with children in group homes and her dissertation of thesis on dyslexia. Throughout her career, she has worked with disabled children teaching them to read and write as well as to take care of them in terms of hygiene and clothing. She also returned to Buffalo State to receive her Masters in Teaching.

Dianne lived near the school and befriended other commuters, where they formed a study group that would also serve as a party group on Fridays. Having friends to deal with the stress of schoolwork, which was typically seven classes per semester, and a part-time job at a grocery store, was a big part of her time at Buffalo State.

Dianne also recalled some of the effects of the civil unrest at Penn State and the national trend of student protests of the 1960s and early 1970s. During her graduation year in 1970, Dianne did not have a The final exams and graduation ceremony was held outside in the pouring rain due to security concerns. Not only did the classes of ’70 have a hectic graduation year, their 50-year reunion landed at the height of the Covid-19 pandemic, the summer of 2020, meaning their reunion had to be postponed to this event a year later. Talk about unhappy timing!

While many decades have passed since these former students attended college and the world around them experienced massive upheaval, the college experience at Buffalo State is still one that can be viewed with emotion. . Who knows where our promotions, or the world as a whole, will be 50 years from now, but one thing seems certain. We will always cherish our Buffalo State time, friends, teachers, lessons and accomplishments and will always be Bengals through and through.